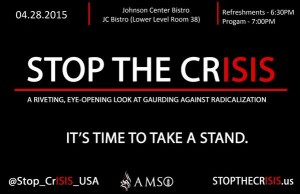 In recent months, the phenomenon of radicalization and extremism among certain elements of society has grown and become cause for concern across the country. In the wake of several Americans, many of whom were born and raised in America, having gone abroad to wage a bloody “jihad” with terrorist groups in foreign lands, radicalization has become one of the most puzzling and worrying issues of the past 2 years.

A great need has been felt to take real and immediate action to work towards tackling and eradicating this problem of radicalization among a small segment of Muslim youth. In light of that need and concern from all quarters, the Ahmadiyya Muslim Community has taken it upon itself to wage a massive, nationwide awareness campaign in the form of a unique and eye-opening production that combines live presenters and video production to delve into this issue like you have never seen before. It’s time to take action. It’s time to stop the crisis.

AMSAW is working with its brother organization AMSA and the Virginia chapter of the Ahmadiyya Muslim Community to hold a Stop the CrISIS event at George Mason University! The event is being held on April 28th, 2015 at the Johnson Center Bistro. Come join us to take a stand!

Our Goals Are Threefold.


1. FAITH ‐ To promote awareness of true Islam and the Ahmadiyya Muslim Community.

3. SERVICE ‐ To provide service to the Ahmadiyya Muslim Community and the large American community.